A civil society is rarely honored by the fact that it can host an event in common with the Embassy. This is a sign that the organization of the event by our Society is a guarantee for the Korean Embassy regarding its quality. One could meet more than 200 cheerful, smiling people in the Orczy Park on the 30th May. There was a possibility to build direct human connections between Koreans living in Hungary and Hungarians. We could enjoy each other’s culture, taste a famous traditional food within the framework of an informal talk.
In the course of our colourful cultural program we could make our Korean guests acquainted with many uniquely Hungarian things.
The arriving guests were received at the gate in traditional Hungarian and Korean national costumes by the dancers who later came to the stage, meanwhile we could hear zither music. 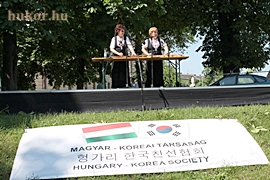 On the stage the Silver String zither ensemble, Keresztúri Gyöngyi and Kersztúri Zsuzsi. 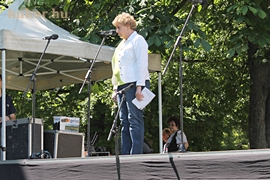 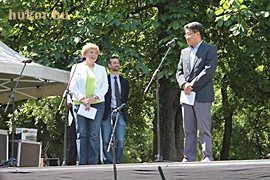 H.E. Yim Geun-Hyeong, Ambassaor of the Republic of Korea, honorary president of Hungary-Korea Society enriched his welcome remarks with a lot of humour. 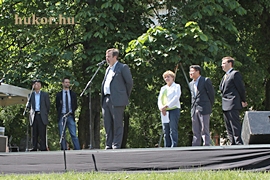 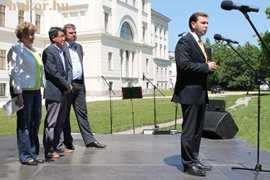 Dr. Kis Norbert, deputy president of the University of Public Services welcomed participants as „host” of the event.

After short speeches the cultural program began on the stage. 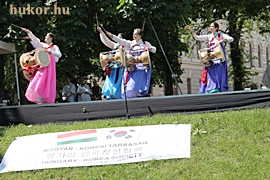 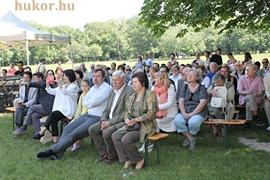 The audiences followed the program sitting under shadowy trees in the nice sunny weather. 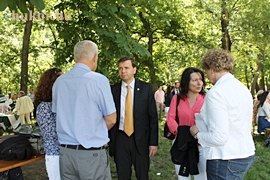 But there was a possibility for conversations as well.

The artist members of our Society did not perform anything now but they found it important to be present at the event. 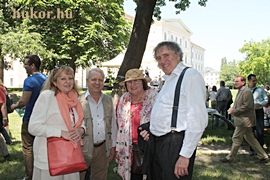 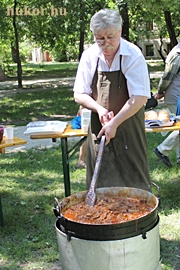 Meanwhile Ökrös Sándor of the Karcag Lamb Cooks Association cooked Karcag lamb goulash in a typical Karcag stew-pan, its smell could be felt from a distance. 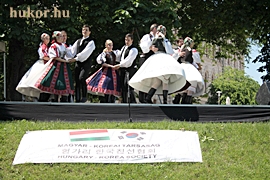 Cedar Ensemble cheered up the audiences with stormy dances. Dances from Kalotszeg, Vas, Zemplén were performed in costumes of these region. 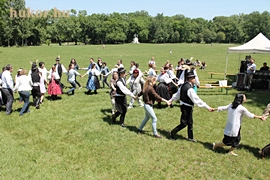 Dancing together of the participants of the picnic began. The „meadow” was full of dancing Hungarian and Korean guests. 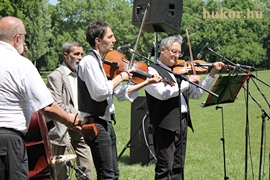 Live music made a great influence on the audiences. 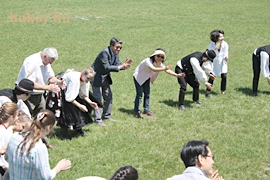 It has not happened before that a Korean ambassador learnt Hungarian folk dances so enthusiastically. 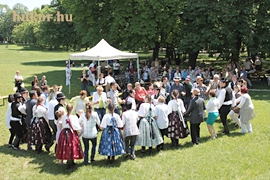 Everyone enjoyed dancing together so much that they did not want to finish it.

Cultural programs were interrupted for a short while by a common lunch. One could eat Korean and Hungarian food. 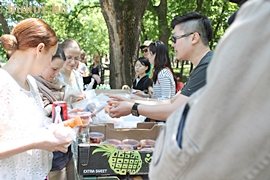 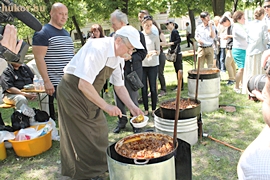 The Karcag lamb goulash was cooked, too, it was tasty.

The program was carried on with visitng the National University of Public Services „Ludovika”. There was a 20 minutes guided tour for groups consisting of 15-20 members. Thus our Korean guests could get acquainted with the building and consequently, with an important period of Hungarian hinstory. 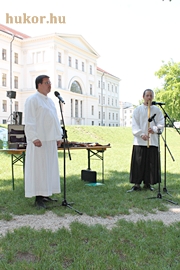 Those who were not just visiting the building of Ludivika, were also not bored because meanwhile Boros Bence and his accompanist held a Hungarian folk music instrument presentation.
Accompanied by singing, they performed pieces on bagpipe, shawn, shepherd’s pipe.

The end of the picnic was approaching and therefore, we raffled the donations of our sponsors. 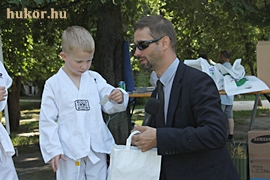 Children from the taek-won-do team helped in raffling. 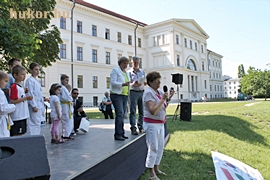 Some people made a short presentation of the product offered by them. 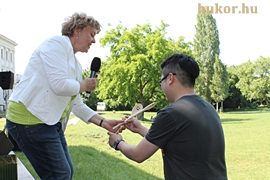 There were funny presents as well, for example wooden spoons with laughing faces. 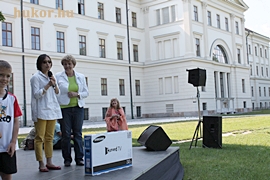 The main prize, a SAMSUNG TV, would have been won by a member of the Korean Embassy, who announced that shw will further donate the TV set in order that a Hungarian can win it at a repeated drawing – she got big applause for this gesture. 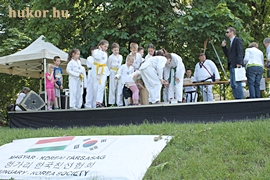 We thanked for the help of the taek-won-do children with small presents. 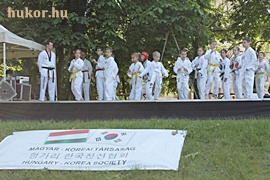 The event was closed by taek-won-do presentation, performed by the youth team of Hungarian Taek-won-do Association.