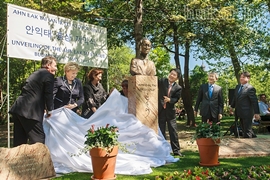 The event was a special one all the more because this is the first Korean monument in Europe. 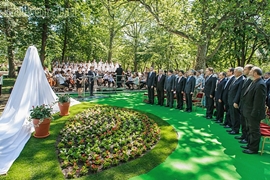 The ceremony was started with the Hungarian and Korean national anthems performed by the Zugló Philharmonic orchestra and choir conducted by Záborszky Kálmán, Liszt prize winner artist.

Ahn Eak Tai lived in Budapest in he period of 1938-1941. Two years from 1939 he was a student of Liszt Academy of Music. He learned music composition from Kodály Zoltán whose guidance was of determining importance for his musical career. That is why Kodály Zoltán is mentioned as one of Ahn Eak Tai’s masters. He enjoyed the attention of giants of Hungarian musical life like Bartók Béla and Dohnányi Ernő. 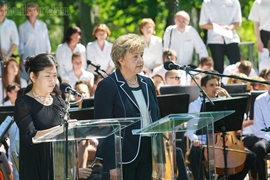 The oeuvre of Ahn Eak Tai deserves recognition and respect all the more he had to face great difficulties during his life. Let us think of the fact that Korea was a Japanese colony in the period of 1910 and 1945 and under these circumstances he wanted to become the composer of the Korean people and its worldwide recognized conductor. 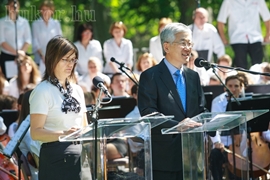 Welcome remarks at the unveiling of the statue were said by H.E. Nam Gwan-Pyo, ambassador of the Republic of Korea.

The Korean delegation arriving for the unveiling ceremony, headed by Kim Hyung-Ju, deputy mayor of Seoul City took part at the concert the evening before and at the festive unveiling of the statue. 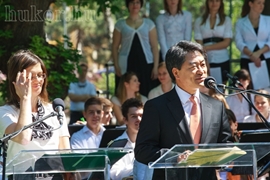 Korean Main Speaker of the unveiling of the statue was Kim Hyung-Ju, deputy mayor of Seoul City.

We can be thankful to the Municipal Government of Budapest that the statue can stand at this beautiful venue, in the biggest and mostly visited public park of Budapest, in the City Park. 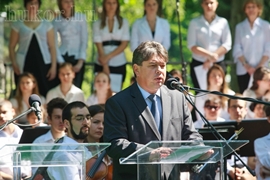 “It is often said but not without a reason that music is a bridge between nations. Even the expression comes from the music, it brings in harmony the representatives of various cultures” – that is how Csomós Miklós, deputy mayor of Budapest, Hungarian Main Speaker of the event started his speech.

Then he went on with this: „Both Kodály Zoltán and Richard Strauss were proud of their desciple. Talent of the young composer and the remote world that he represented fascinated his European teachers. We, Hungarians, are proud of the fact that this world famous composer started his career here in Hungary.
The support of Zugló Local Government contributed to the positive decision of the Municipal Government of Budapest. Zugló Local Government took charge of the inspection, superintendence of the Ahn Eak Tai statue. 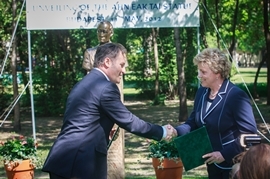 The statue was taken over from Hungary-Korea Society by Papcsák Ferenc, mayor, on behalf of Zugló Local Government.

The unveiling ceremony was started with Aegukga, the Korean national anthem, and the end could be nothing else than again the music of Ahn Eak Tai. 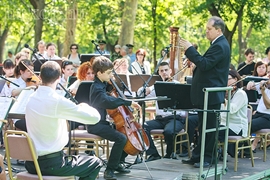 The exhibition showing the period of life of Ahn Eak Tai connected with Hungary with documents and photos of that age was opened on the same day. 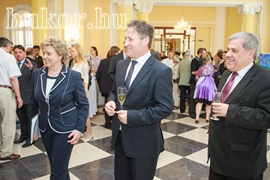 Upon request of the Society our exhibition „Ahn Eak Tai in Budapest” was opened by Batta András, president of Liszt Academy of Music. 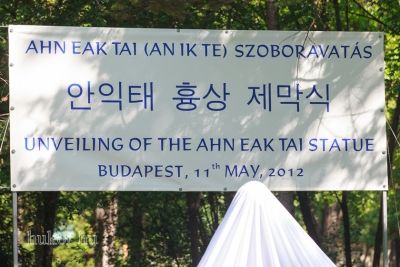 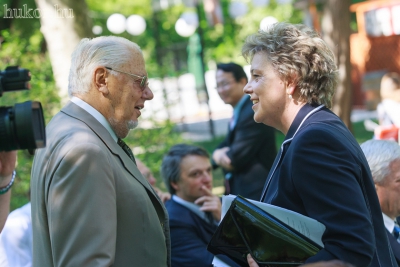 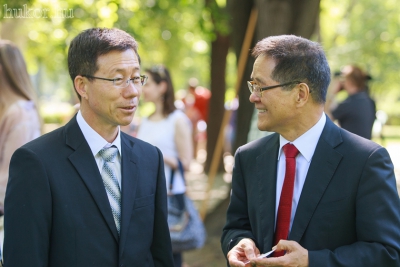 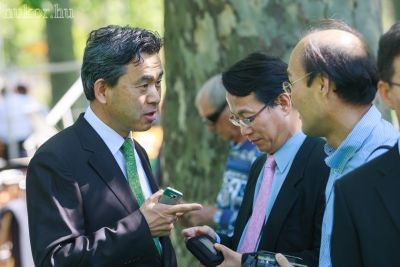 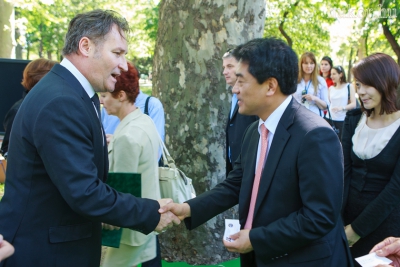 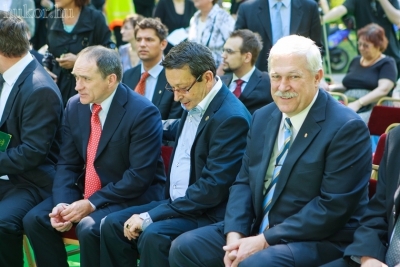 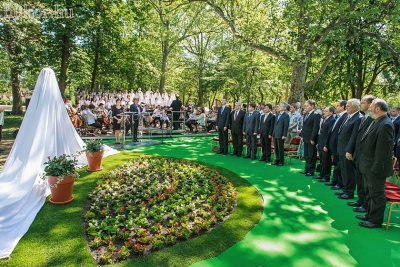 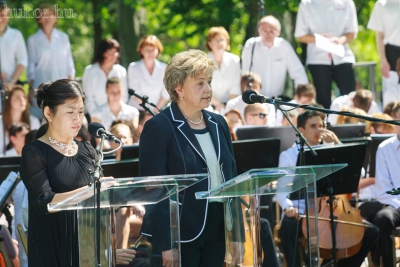 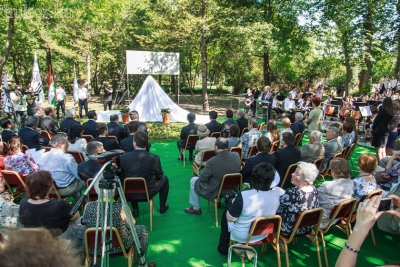 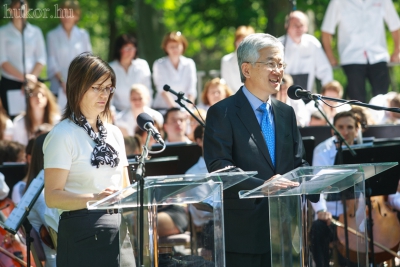 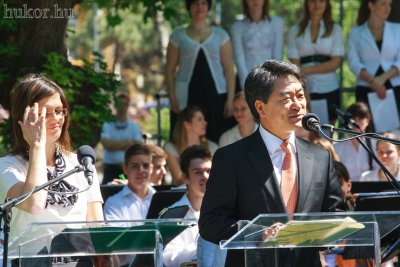 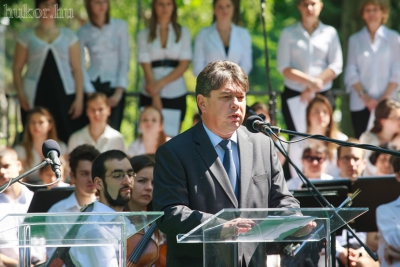 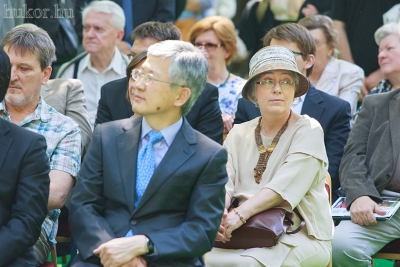 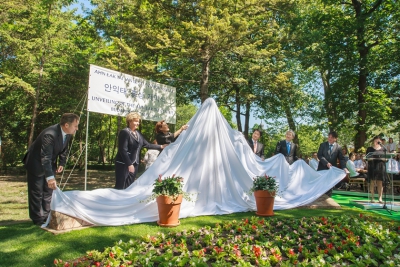 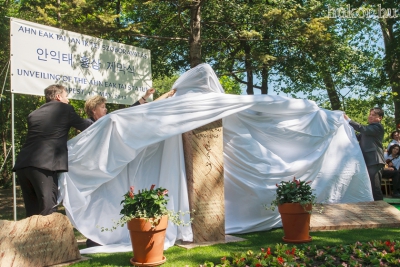 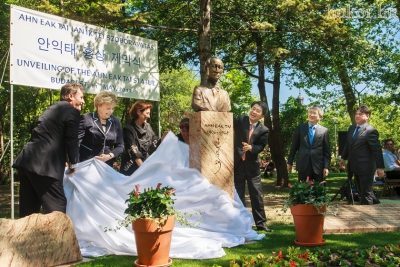 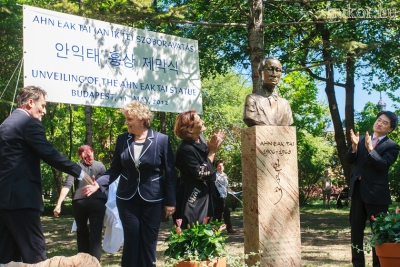 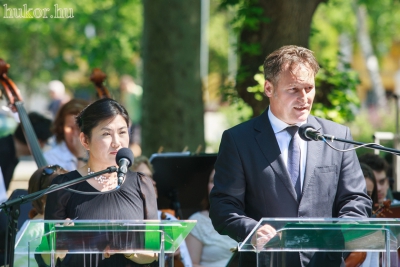 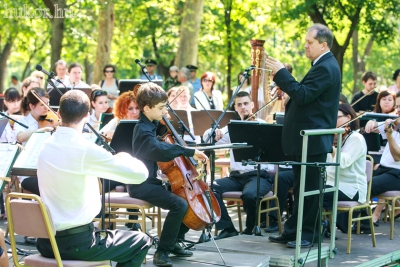 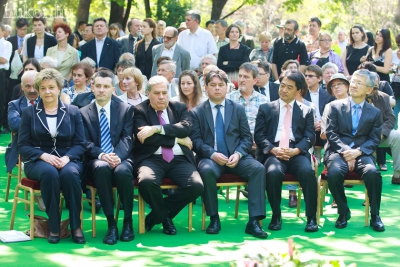 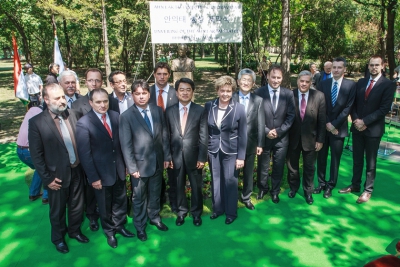